May readers be adventurous and enjoy exploring blogs in the New Year - ;))

I received an email from a new reader a while ago -


Letters to name things - Thanks for telling me!! I forget sometimes that people may just drop in and not know what I'm talking about - and I have mixed feelings about that. On the one hand - I have the same complaint about some of the blogs that I visit - and I don't want to alienate new readers by referring to stuff they haven't read about. But on the other hand - a little bit of blog exploring is fun - and I hate to have to repeat myself ad nauseam for those who read me regularly. I do try to explain the abbreviations in the posts themselves but some of the titles of posts have abbreviations to save space because Blogger cuts them off at a certain point. AND - I think that some abbreviations are obvious - or at least they should be - ;)) LHQ is Left-Handed Quilter - and my LHQSQ has a page/tab at the top called LHQSQ - LHQ Sampler Quilt. The only other one what might be weird is LTRTCWSA - and for that one - you should follow the link - and read the post - haha - ;))

Now I know what I have already written -

Or a regular reader -
Who already knows what I'm talking about -

And since I can't please everybody -

And in the spirit of New Adventures in Blogland -

Time that I would rather spend SEWING -

And not bother much with labeling my posts -

Or linking back to some of my older posts -

Or explaining my references ad nauseam - ;))

And will link to OTHER stuff and OTHER blogs, of course -

And in case you don't already know -

EVERY Blogger blog has a Search Box up top -

It's that empty little WHITE box in the top LEFT corner -

And read the posts -

Then go over to Linda's blog - HERE -

Posted by A Left-Handed Quilter at 4:00 AM 4 comments:

For the past couple of years -

I have shared a beautiful Christmas Card -

That I received one year from a dear friend - ;))

It is one of the most beautiful Christmas Cards -

That I have ever seen - 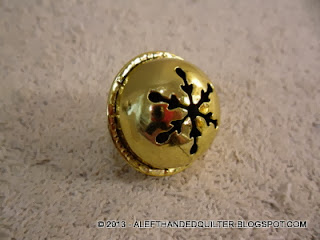 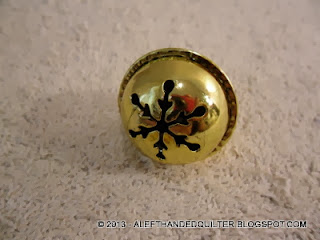 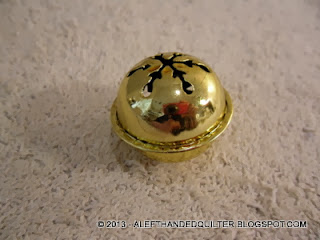 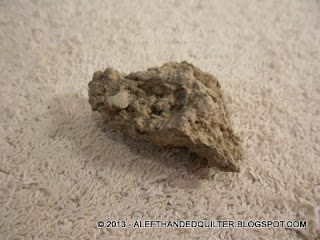 Posted by A Left-Handed Quilter at 4:00 AM 8 comments: 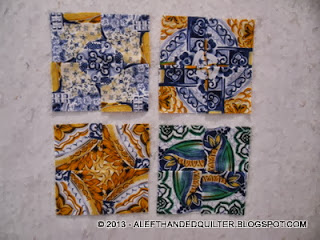 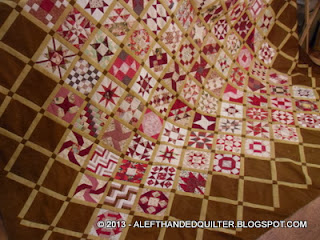 Some people think that it’s unlucky -

But I don’t think that it’s unlucky at all -

I think that it’s like an extra Halloween day - ;))

We always have a Halloween -

And now we have another one -

Posted by A Left-Handed Quilter at 4:00 AM 6 comments: 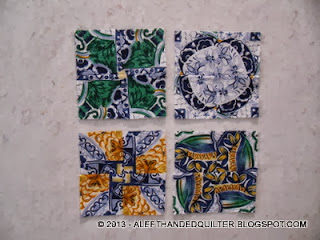 Rotary cutting according to pattern instructions -

Can be a challenge for Lefties -

Because the photos are usually Right-Handed -

Since we Lefties normally cut -

So kudos to those who include instructions for ME -

I have posted some tutorials -

For other Left-Handed Quilters -

They can be found under the page/tab labeled -

Scroll down until you find -

And you will find tutorials -

And reviews of some rulers -

I have tons of other rulers that I have never used -

Because I haven’t taken the time to figure out -

How to use them Left-Handed -

So I could/should try to figure them out -

In this next coming year -

And may others be inspired to do the same -

I really don’t think that we can have -

TOO MANY Left-Handed tutorials -

And I’m doing some year-end planning -

I want to try an experiment -

To see if I can get some of my stuff QUILTED -

I had a stack of fabric -
Pulled for the October and November Sudoku quilts -
That I never made - HERE - ;)) 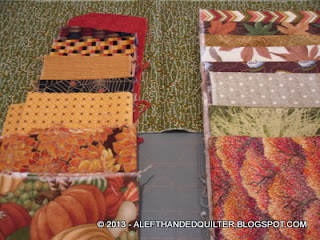 Some of it wasn't washed yet -

Is on the other design wall in the hallway -

Just waiting it's turn to be out -

I have an idea for the borders -

Another round of blocks of some sort - ;))

But I need to finish the center blocks first - ;))

After I folded and put away the Halloween stuff -

And "cut and kitted" the Thanksgiving Sudoku -

And put that away -

Today I want to set myself up -

For my quilting marathon -


NOTE - Check out the page/tab above for links
to my other Sudoku Quilts - ;)) 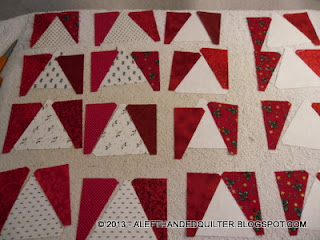 I think that I have finally decided to use -

RED (instead of orange) -

With BLUE as the fourth required color family -

Plus the usual NEUTRALS for background - ;))

And I think that I will call mine “Celtic Christmas” - ;))

So I pulled out some REDS and NEUTRALS for Part 1 -

And thought that I would make my star points -

I need to be careful -

Where I put my GREEN -

Because I want mine to look -

Posted by A Left-Handed Quilter at 4:00 AM 4 comments:

The one that I talked about on Monday - HERE -

EVERY time I make a new button -

And I have made several -

EVERY time I make notes outlining the steps -

To remind myself how to do it -

Notes on what code goes where -

So that I don't make the same mistakes the next time - ;((

The next time - same thing -

Tuesday I kept getting an error message -

I even tried to compare my new code -

To the code I used on my UFORIA button -

And wound up somehow messing up THAT button -

Then I messed up the Right-Handed Friend button -

So right about then -

I had HAD it with the dang buttons -

So I asked my tech support (My Other Half) -

To check out my “javascript” stuff -

And work his magic -

I wanted to try again later -

I was going to have to wait until the morning - ;))

When they do what they are told -

Otherwise they frustrate the heck out of me - ;))

I only have so much patience -

And I would rather spend it UNSEWING - ;))

After my nap I tried again -

And it STILL wouldn’t work -

She had just made a button for her new -

All about How to add a button to your blog - HERE -

And she said that she -

EXACTLY the information that I needed -

An "app" for adding a Grab Button -

And SO much easier than futzing with the HTML code - ;))

So I made the button -

And I THINK it works -

Would somebody please try to copy it -

And add it as a gadget (HTML/JavaScript) to your blog -

It should show up as a button on your blog -

That links back to my blog -

Major emphasis on SHOULD - ;))

Posted by A Left-Handed Quilter at 4:00 AM 6 comments: 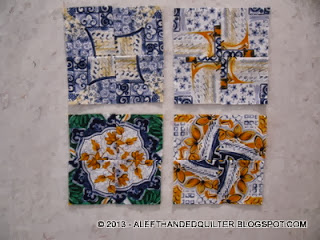 To play the game -

I have to fill my glass container - 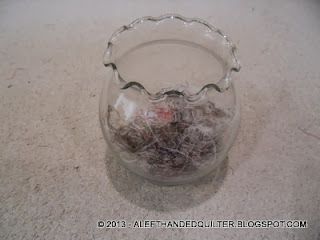 Take a picture of the ORTS in my jar -

With a link back to her TUSAL post - HERE -

And label the Totally Useless posts with “TUSAL” -


Posted by A Left-Handed Quilter at 4:00 AM No comments:

My design wall this week -

Is the same as last week -

Waiting its turn to be added to the Center Section - ;)) 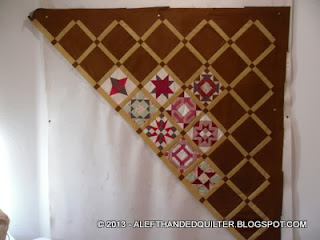 The other day I wanted to take a little break -

And I wanted to play with something else for a bit - ;))

I am one of those with good intentions -

When I saw A Round Tuit button on Mtn Mama’s blog -
Pots, Pans, Pins and Prayers - HERE -

Jill hosts the button and has a tutorial for a mug rug - HERE - ;))

I smiled and remembered -

That I already HAD one -

That I had forgotten about -

A few months before my dear friend R died several years ago, she sent me a packet of photos and other memories. She included this Round Tuit from many, many years ago. She had given me my first Round Tuit over forty years ago - and I had misplaced it - so I was thrilled to get a replacement - ;)) 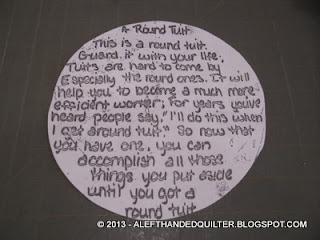 
A Round Tuit
This is a round tuit.
Guard it with your life;
Tuits are hard to come by
Especially the round ones. It will
help you to become a much more
efficient worker; For years you’ve
heard people say, “I’ll do this when
I get around tuit.” So now that
you have one, you can
accomplish all those
things you put aside
until you got a
round tuit.
So I have no excuse - I could have accomplished all of those things that I put aside until I got A Round Tuit - because I already had one - ;))

Then I decided to make another version - ;))

Maybe a Mug Rug will remind me

I found a font that I liked - 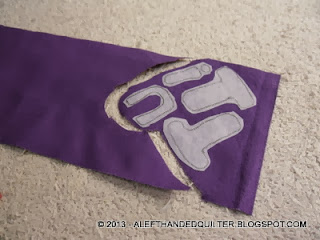 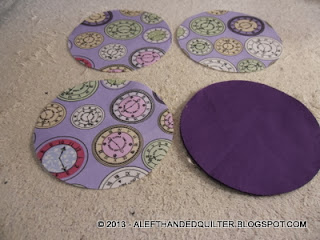 Layered them right sides together -
And sewed completely around them - 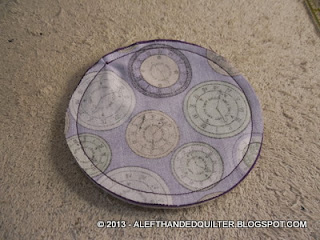 Cut a slit in the front -
Where the first “T” would go -
Turned it inside out -
And appliqued the letters on top -
Hiding the slit - ;)) 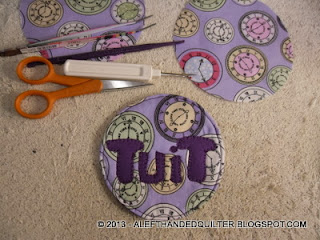 It came out a little small -

I made another mug rug - 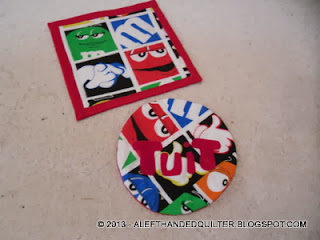 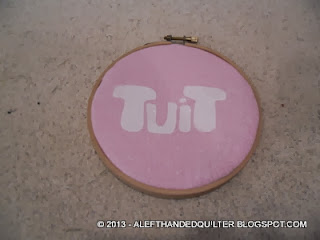 This one reminded me of my LHQ button -

So now I want to make my own round Tuit button -

And then my brain started spinning -

With all of the possibilities -

I could fill a jar with different colored ROUND buttons or marbles -
Each color for a different kind of task - Sew - Quilt - Bind - Sleeve - etc.-
And choose one at random -

I could use a Bingo Spinner to choose projects -
Just need to make a list to correspond to the Spinner - ;)) 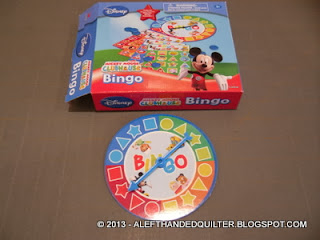 I may even rename my UFOs -

And start calling them TUIT PROJECTS - ;))

And I think that a Tuit Mug Rug -

Would make a GREAT Christmas gift - 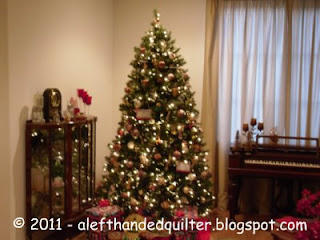 We put our Christmas tree up a few years ago -

And have never taken it down!!

Our Christmas tree is up year-round -

The BEST part was -

We didn’t have to mess with the LIGHTS!!

The LIGHTS were already ON the tree!!

When it came time to take the tree down -
We hesitated -

How were we going to get that HUGE Christmas tree -
Back into that little bitty box -
Without breaking some of those beautiful fiber optic lights??

So - the decision was made -
We weren’t even going to try to get it back in the box -
We were going to just leave it where it was!!

That tree has been up for years -
And will continue to be up for as long as we live in this house.

The only difference between Christmas and the rest of the year -
Is that we turn the lights ON at Christmas.

Besides - it’s in the perfect corner of the living room -

It isn’t until they leave -
And head back to the front door -
That they even see the tree -
And that's when we tell them that it’s up because we couldn’t get it back in the box.