DESIGN WALL WEDNESDAY - or -
WHAT AM I DOING WEDNESDAY?

I picked JELLY BEANS to work on first - a simple kit from Connecting Threads - Riviera Collection (no longer available - sorry). 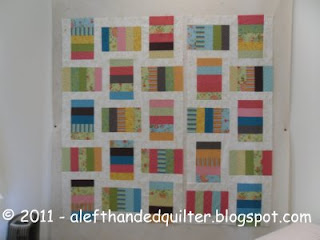 The colored strips came pre-cut - 2-1/2" wide - with pinked edges.  The white fabric was yardage included in the kit that I rotary cut myself.  (It still needs a couple of borders - so don't judge it just yet.)

Has anyone out there seen it?  I thought I had it right here a minute ago!  Where - oh, where - did it go?  As you can see - my strip sets did NOT match the white strips that I cut to fit on the ends!  They are all SHORT! 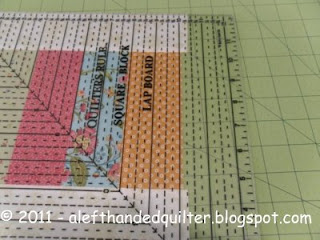 I have my 1/4" presser foot.  I have my perfect "scant" 1/4" seam allowance settings.  I have everything I need.  What happened this time?  (I lose it every once in a while - but usually find it again soon enough.)

I was having such fun just chain piecing my little heart out - adding one strip right after the other - to twenty-five blocks. 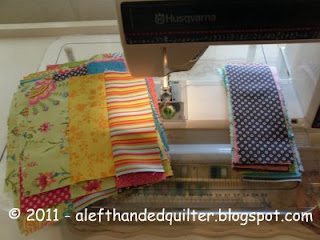 This time I think the cutting was to blame - not the sewing.

I think that the pinked edges messed me up.  If the 2-1/2" is measured from pinked tip to pinked tip - I think I may have lost a couple of threads on each tip - with handling, sewing, and such.  Add up the lost threads on both sides of FIVE strips - and I think I found my 1/4".

At least that's what I think happened.  Who knows?

And at this point - who cares?  I had twenty-five blocks all sewn together.

(And - YES - I noticed it when I sewed the first side - but somehow it didn't register in my Swiss-cheese brain - and - YES - I did a test block before I sewed them ALL together - the test block came out OK - go figure!)

Now - don't get me wrong - if this was any other pattern - or something that I was going to enter into a competition of some sort (the UFO Challenge doesn't count - it's not being JUDGED) - then I would have been a whole lot more careful and all of the blocks would have been tested at each and every step.

But, hey - this is JELLY BEANS - a fun, little, simple quilt - knock it out in no time at all, right?

Then I remembered something that I discovered many, many moons ago. 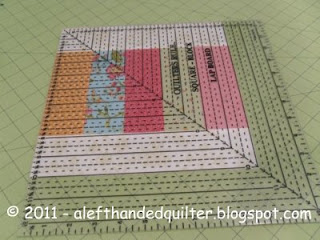 So now all the blocks will fit together nicely.

I have the first three columns (A/B/C) sewn together - and the last two (D/E) sewn together.  I basted the match points before sewing them "for real" just so I would be sure that they matched,  (The blocks have already come up short - I don't need mismatched corners, too.  I'm sure that would push me right over the edge on this one - and JELLY BEANS right back into the UFO pile.) 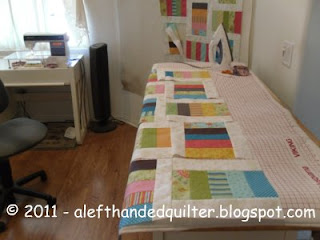 All I have to do now is sew the two sections together - add the borders - and move this one up to Stage 5.  Then I can choose another UFO from my Stage 10 list .  Which one? - which one?  Shut up, Kitty - you have to get the borders on JELLY BEANS first - before you get bored - then you can worry about the next one.  (And you wonder why I have so many UFOs!)

Looks good. The end result is what matters.

Okay, I think this will work for my leftover bits of Pop Stix but mine will be narrower---and I hate to even utter the words "negative space" as that is just far too precious so lets just call it was it is---background. But I COULD be wrong, LOL.