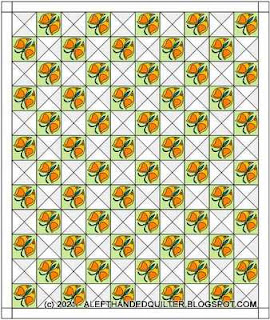 I know it doesn't look like "Hearts" -
Because I used a "Butterfly" - LOL -
All of the "Heart" samples were "straight" -
And I wanted one on the diagonal -
So I used a "Butterfly" instead -
Anyway -
This is just a "first" draft -
And I thought about using sashing and cornerstones -
But if I use an "Hourglass Block" -
As an alternate block -
And shade them in darker tans and grays -
I should be able to applique the Hearts to a variety of "neutrals" -
Once I decide on a block "size" -
And make them look like they are "on point" and  "framed"-
Without all of that extra work - LOL -
What do you think? - ;))
Talk to you later - gotta go - gotta sew -
Posted by A Left-Handed Quilter at 12:30 AM

I really like that idea for the quilt. If you have enough scraps that will work, you can use the same fabrics in the hearts for the hourglass blocks around each one. (or put them somewhere else in the quilt for a scrappier look.) Of course that depends on the block size since I think a lot of your quilts are done with strip sets - and that may be too small.
I can't remember if you have an actual design wall. But to get the hourglass blocks to match the heart blocks without could be a challenge..

I can't even imagine trying to learn EQ. I just fumble around with graph paper. With all those variety of fabrics in the hearts, for some reason, I see them dancing- being offset in blocks- so that they look active. I could draw it better than write it.

I also meant to say that once you get used to that version of EQ, you will never want to go back to the previous version. I thought "WHY???" when I first got it, but soon I was totally loving it.

Using nothing electronic is my cup of tea for sewing and quilt-making. I don’t even have an electronic sewing machine. My 3 mechanical work-horses that I can service myself are my friends. Heck, I don’t even have a non-electronic Go cutter. I find something soothing in pushing my rotary cutter along as it swishes through fabric. I know those of you who use these things are making incredibly beautiful designs and don’t want to be without them. When blogging first became available I didn’t even want to do that at first. I just kept believing I needed to keep my creative life and computering separate. I now stand corrected by all who so very creatively use things like EQ. Not to mention sewing and quilting machines that can be made to sing and dance. I guess I’m just old-fashioned, and now that I’m pushing 78 and my hand arthritis acts up more each day, I think it will always be thus. In the meantime I totally respect and enjoy the amount of beautiful projects you are able to complete, so I keep following by blogging. Someday I’ll finally throw in the towel, but I won’t stop visiting! I am looking forward to your heart memory quilt, and it’s always fun to follow along each day with every step of the way. The results will be awesome!

That was one yummy jigsaw puzzle. I would not have thought to turn the pieces over for a challenge.
Meanwhile this idea for the quilt is really neat. Happy planning!