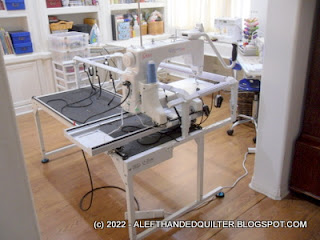 For the larger Q-Zone Queen frame - HERE -
I've been like a kid waiting for Christmas -
And today was Christmas - in September -
My new frame came today! -
YAY!! -
While the dealer was dismantling the old one -
And setting up the new one for me -
I sewed the other half of some zippers on the leader cloths -
So that I could load the backing -
For my Upstairs/Downstairs - Wild Things - 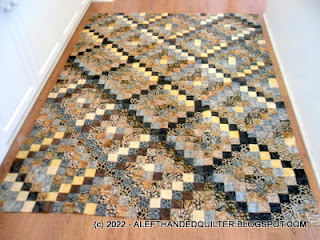 And when he got it all together -
He helped me attach the leader cloths to the rails -
And we zipped the backing on -
Easy peasy!! - 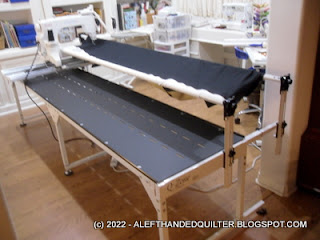 I was afraid that I had messed up when I ordered 90" zippers -
Because the leader cloths are only 88" -
But the zippers worked nicely -
I have plenty of room at the end of each rail -
The 88" is the maximum reach before the leg of the machine hits the side rail -
So I was able to load the quilt backing on sideways -
Just like I wanted -
By the time he was finished it was about 7:00 PM -
So I took a quick photo after he left -
And wrote up this post -
Tomorrow I'll do some tidying up and put some stuff away -
And re-roll the backing nice and neat -
Then add the batting and the top -
And take some more photos -
So far - I LOVE IT!! -
It's doubled the size of top that I can quilt in one pass -
And I can still SIT DOWN down while I quilt -
I'm going to have LOTS of FUN playing with my new toy -
I still have a closet full of tops -
Just waiting to be made into "real" quilts - LOL - ;))
Talk to you later - gotta go - gotta sew -
Posted by A Left-Handed Quilter at 12:30 AM

You're going to have so much fun with that
closet full of quilt tops.

This is so exciting!!! Your dealer was very helpful with the breaking down and setting up process. Can't wait to see the new photos.

That is nice! I am glad you can still sit to quilt AND you have the length to load the quilt sideways.
Of course now there is no reason for you to NOT make a queen-sized quilt.

Yay!! Yes you will really move them through now.