With the quilting -
On my Antique Squirrel - BIG BROTHER version - 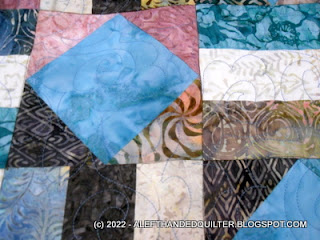 I realized that I had another project called Antique Squirrel -
That had 3" units and 9" blocks -
So this one is actually the BIG BROTHER version -
With 6" units and 18" blocks -
Hopefully I can get it quilted by the end of the week -
The design is very forgiving - if I miss a spot -
Because the thread blends in so well -
And sometimes I can't see where I already stitched -
I just echo around until I get to where I need to be -
Thread that blends is both good and bad -
Good - it hides the boo-boos -
Bad - sometimes I can't see where I stitched -
And leave gaps that I have to go fill in later -
Or stitch too closely to what I already did -
Good thing it isn't going to be judged -
Just washed to get the texture and to be napped under - LOL -
It IS moving right along now -
So I should have it done before I get the new frame -
It still takes me longer to re-hoop for the next "zone" -
Than it does to actually quilt the design -
I'm looking forward to being able to do one complete pass -
Before having to "advance" the quilt - ;))
Talk to you later - gotta go - gotta sew -
Posted by A Left-Handed Quilter at 12:30 AM

I know I told you this before but I really love the colors in this quilt.

Your post must have been later this morning. I am glad you are doing well and quilting right along. I love using echo quilting to move around when I get "stuck."