A quilt backing on a longarm -
For the first time -
Is an adventure! - LOL -
And that's as far as I got today -
We did a "quick and dirty" attachment of the leader cloths and the backing -
Last night before the dealer left -
So today I tweaked it a little -
Starting with re-centering the leader cloths with the center of the frame -
Since the frame can be configured in either the Crib size or Queen size -
Both rails connect in the middle -
So I used the space/gap between the two rails as my center marking -
And tried to line up the center-most straight line of the leader cloth with it -
(BOB thinks that would be easier to do -
If the line extended to the edge of the leader cloth -
and if it matched up to one of the dots -
but then again - it's probably just me - LOL - ;)) 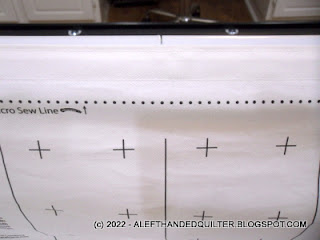 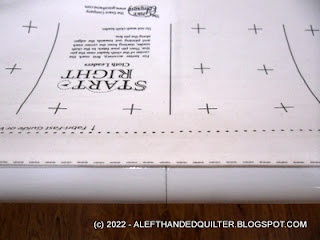 I re-attached the leader cloths to the rails using the velcro that came with it -
(BOB thinks that the velcro on the leader cloths AND on the rails -
Is an AWESOME feature -
And it beats trying to stick some tubing in a groove - just sayin' - ;))
Starting in the center and working my way out to the end on each side -
Pressing down as I went - SO EASY!! -
If it got a little crooked - I peeled it off - and stuck it down straighter - LOL -
I had already zippered the backing in place last night -
But I didn't get a chance to take photos -
So here is the LEFT end - of the TOP of my BACKING - 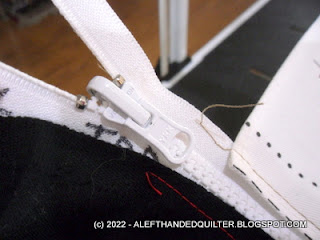 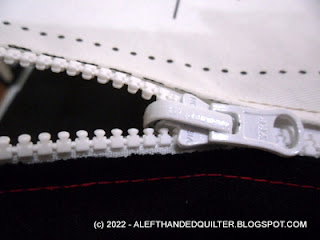 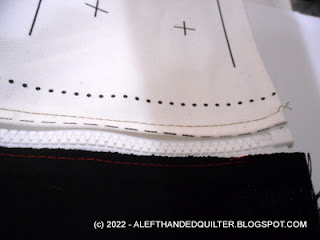 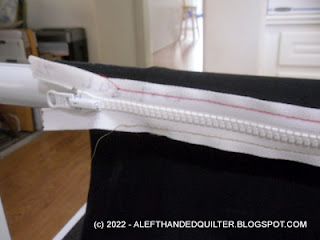 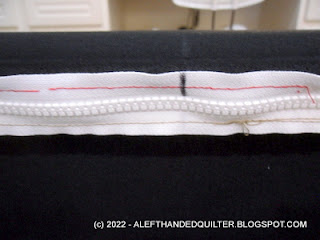 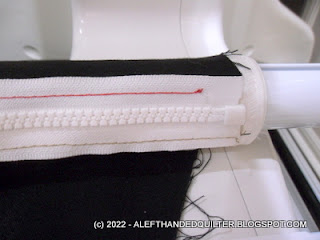 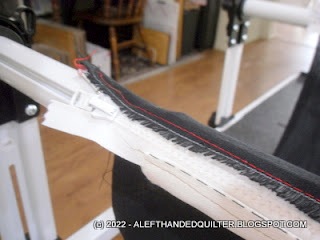 And the zipper STOP at the RIGHT end - 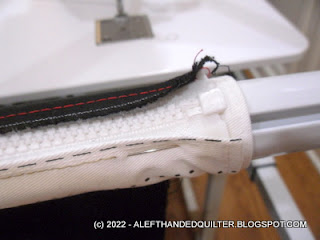 Then I rolled my first backing on a longarm - YAY!! - 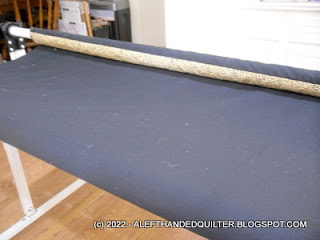 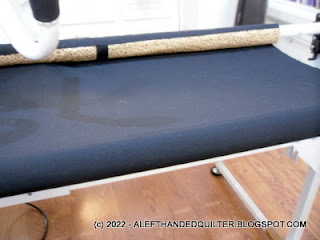 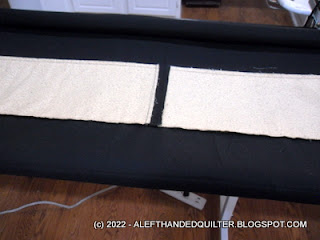 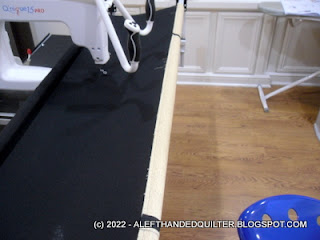 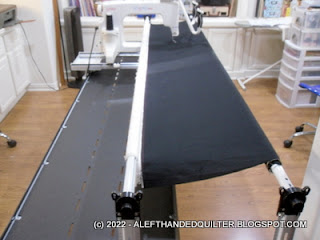 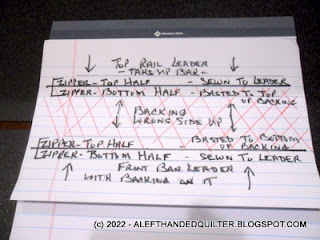 I basted mine to the leaders - for the time being -
Later I may actually SEW them on - to make them permanent -
If I like them - and so far - I DO -
You want zippers as long as your leader cloths -
I got mine 2" longer - accidentally - but it worked out for me -
Because they were still shorter than my rails -
And you want to BASTE them in place -
Starting at the CENTER of the zipper -
Matching the CENTER of the leaders and backing -
And stitching to each end -
That way the centers will line up -
No matter what size backing you have -
The excess will just hang off the end -
But be careful that it doesn't get in your way -
Or interfere with your machine quilt "space" -
I BASTED mine to the backing - temporarily -
In a color that I can SEE -
Because - when I'm done -
I want to take them OFF -
And use them again on another backing -
And removing basting stitches -
Is a whole lot easier than UNSEWING the dang things - ;))
Talk to you later - gotta go - gotta sew -
Posted by A Left-Handed Quilter at 12:30 AM

Yay! I am glad you got if figured out and have the first backing loaded. Since you did others using the snap frame, you should be in pretty good FMQ practice for this one. Just keep going and it will get better as you go.

Nice tutorial on the zippers too.

Super tutorial for the zippers. This is going to be great!

Good for you! What a process. I'm sure it will get easier the more you do it....not that I'll ever know LOL.

Get a centering measuring tape that you stretch across the front bar. I have mine attached with velcro. I always know center without measuring and constantly check when basting down the top sides. Let me know if you need a link. I could never master zippers. Like my leader grips, work for non math me.

Hooray! Could you just take a sharpie marker and extend that line yourself? Maybe use a ruler to get it perfectly straight, but I agree having it not printed to the edge was silly. I'm excited you're figuring out how to load in a way that works for you (if the quilt comes out fine, I'm a big believer that how you got there isn't terribly important - just don't break anything along the way!) and even more excited for you to get quilting!