Blocks on the wall for my Pink/Orange Squirrel -
To help me decide if I want to alternate them -
Positive/negative -
And I think I do - ;)) 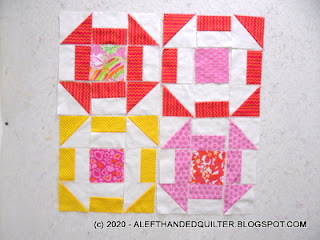 I took another look at the first two up on the wall -
They aren't sewn together yet - just the parts are on the wall -
And realized that the seams would nest better if I alternated them -
Since I pressed them ALL to the dark -
And don't want to repress them -
Then Gene pointed out that I would have to "snowball" them -
If I didn't want to have big white squares at the corners of the blocks -
And I'm not a big fan of "snowballing" -
So that's reason #2 - LOL -
Then I added the bottom two blocks in different colors -
And I LIKE it -
The colors are bright and HAPPY -
And I think we all could use a little more of that these days - ;))
Talk to you later - gotta go - gotta sew -

Yeah, hand me some bright and happy and I press the seams in a circle without worrying about dark and light. I like the corners open without a big pile of seam allowances.

Bright and happy is always good for a project. I am excited to see a lot of these on the wall.

Press the seams in a circle, to the dark, etc.??? Um, I know what they mean but never bothered. Lol! This will indeed be colorful. You go, girl!

I love it! So cheerful.

The blocks look great together

I just finished quilting a churn dash I did from vintage blocks. Have to look for binding fabric before I show it on the blog. Looking very cheerful.