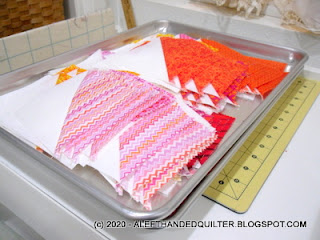 And I WON a little game of "Bobbin Thread Chicken" -
That little bit was all I had left on the bobbin -
When I finished the last HST -  YAY - ;)) 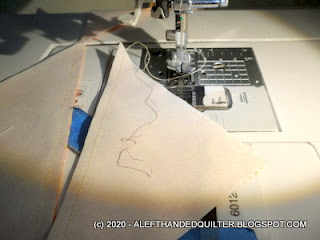 This Squirrel isn't going to be anything fancy -
Just a Missouri Star Quilt Co. version of a Churn Dash - HERE -
The white combined with the bright colors should calm them down -
Plus it also helps the charm packs make more blocks - LOL - ;))
Jenny uses a layer cake -
But it works with charm packs, too -
If you can get 4 squares of the same or similar print -
So the next step was to trim all of the HST down to 4-1/2" -
Trimming is not my favorite pasttime -
I much prefer to use my LEFT-EZE™ Rule to cut HST - then trim ONE dog-ear -
And I don't like drawing lines and sewing to the left and right of the lines -
But to each his/her own -
Anyway -
I trimmed up a couple -
And liked getting the chance to get rid of some of those "pinked" edges -
But I wondered if there was an easier way than to cut each one twice -
Up the left side and across the top -
Rotate the HST and do it again up the other side and across the top - 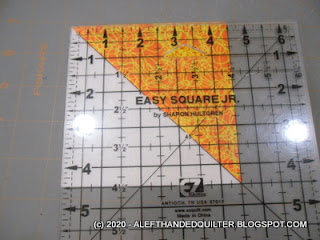 I wondered if I could trim BOTH sides at the same time -
Maybe if I folded it back up the way it was sewn? -
But what do I use for the "line" to line up with the HST? - 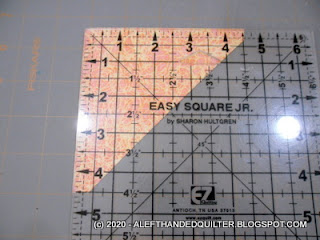 What if I could use my LEFT-EZE™ Rule to do it?
That would be cool -
So I tried it -
I used a HST that I had trimmed already -
Lined up my LEFT-EZE™ Rule with the HST -
And used another ruler and a Sharpie to mark my "guideline"-
A "smidge" to the outside of the HST to allow for the width of the line - 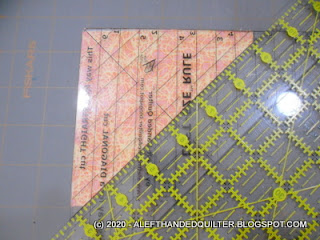 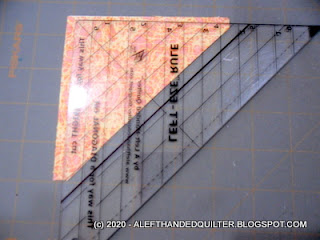 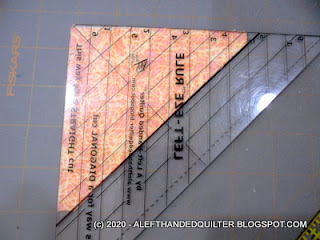 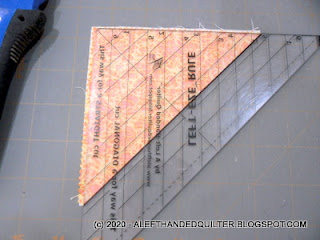 Trimmed UP and ACROSS - ONCE - 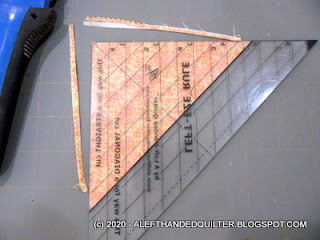 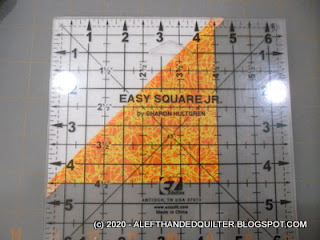 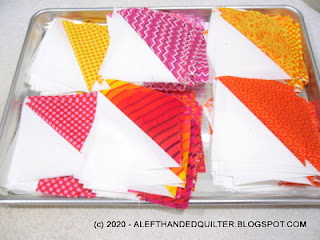 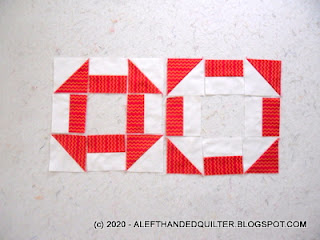 And then I added a "center" to each one - The "centers" are really colorful -
So I'm leaning toward making the "positive" version -
I think I need that WHITE background in each block to tone them down a bit -
What do you think? -
Let me know in the comments -
Thanks!! - ;))
Talk to you later - gotta go - gotta sew -
Posted by A Left-Handed Quilter at 12:30 AM

I like the white background. I love the bright colors!

I do like the white background. But if you aren't snowballing the corners, doing half of each will avoid having so many white squares in the top.

I agree. Orange always needs toning down. Not a fan of orange. 🤣