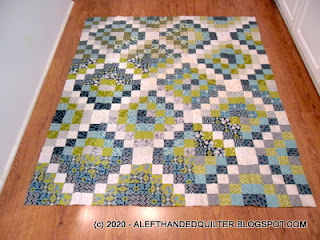 It's one of my favorite - no-brainer patterns -

Since there are two each of 20 different prints - 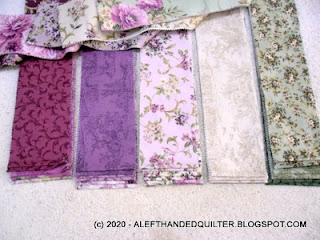 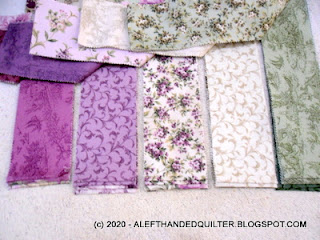 And the last two - 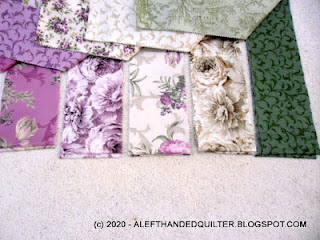 I'm playing with the first sets of strata - 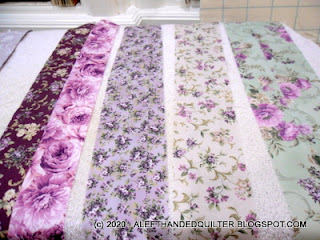 And the rest are waiting their turn - 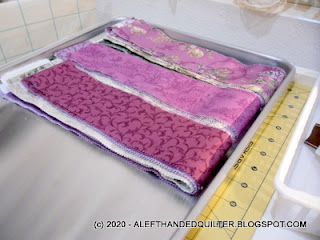 If my MATH is correct -

Each 5-strip strata should give me three 10" blocks - 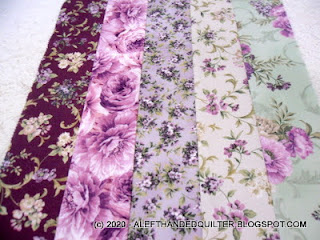 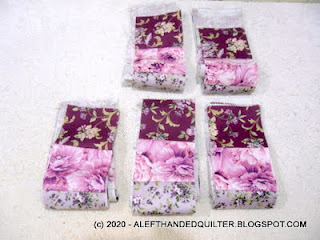 And made the blocks - 6 identical blocks in 8 different variations - 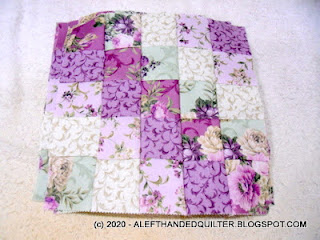 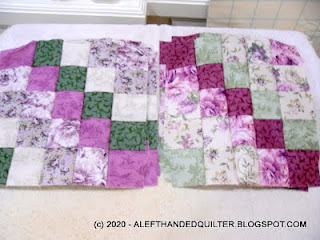 I put the blocks up on the design wall in DIAGONAL rows as I finished each "set" of 6 blocks - in a stair-step sequence - just like the blocks - with the blocks in each row oriented in the same direction - going either UP or DOWN - because it was easy - and I could see the pretty colors -
When I finished all of the blocks - I rearranged them for what seemed like f.o.r.e.v.e.r. playing with the layout - trying to get the colors/value balanced -
I could have kept futzing with it - but I didn't like what I was seeing - and I was getting frustrated - there HAD to be an easier way -
So - I took them all down - and started over -
Then I put them back up on the design wall -
Pretty much the same way I had them in the first place - stair-stepped -
Because I thought they looked "pretty" that way -
Which is kind of funny to me now that I think about it -
I "accidentally" had it right in the first place - LOL -
One of those "Happy Accidents" that make life so much fun!! -
So - my "layout formula" is to use a stair-step sequence - just like in the blocks -
And alternate one diagonal row UP - and the next one DOWN -
It's so simple - it makes me wonder why it took me so long to figure it out - LOL - ;))
Anyway -
The top is made using 48 blocks - 6 rows across and 8 down -
So ALL 6 blocks in the first THREE diagonal rows fit across the top in ONE diagonal row -
Rows #4-5-6-7-8 will be split up - you'll see later - ;))
In the photo below - the first "column" has two blocks - alternating UP and DOWN -
Step 1 - Choose the SECOND Block in Column One -
Decide which block(s) you want for the SECOND DIAGONAL row -
That row is the MOST DOMINANT one in the whole top - and the most critical -
So I chose the "prettiest" PURPLE print for that row - and it goes DOWNstairs - 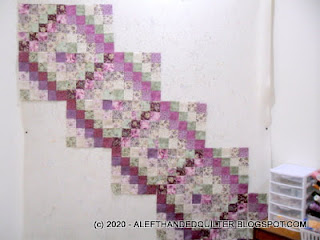 Step 2 - Choose the TOP LEFT Block -
Decide which block(s) you want for the FIRST DIAGONAL row -
The row ABOVE the one you did in Step 1 -
The dominant diagonal in this row goes in the other direction - UPstairs -
So it's effect is a tad bit different - and all 6 blocks fit across the width of the top -
I chose the next "prettiest" PURPLE for that one -
Step 3 - Choose the First Block in the Second Column -
Because of the stair-step nature of this pattern -
This will also be the last block in the first column -
It goes DOWNstairs like Row #2 - so I chose a pretty one for that, too - 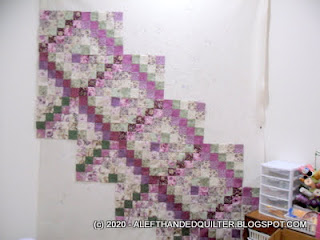 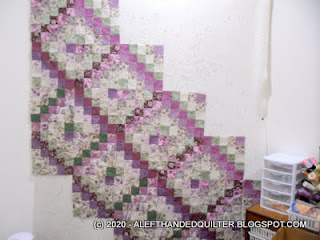 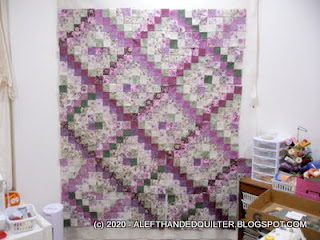 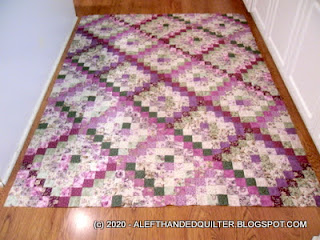 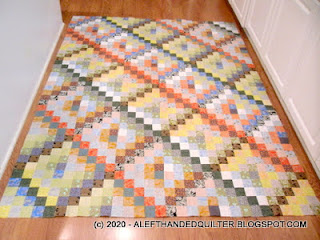 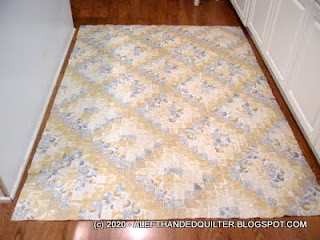 Thanks for a very good explanation. Now I see how you decided to call it "Upstairs Downstairs."

What a tremendous job you did explaining. I am going to sit with some coffee and quiet and go through it line by line. Was hoping for some Black Friday jelly roll sales, but nothing much or not interesting.

Ok, I admit I skipped all the parts that had numbers. I’m number-challenged! I would have just gabbed the fabrics “willy-hilly” and put a top together. Haha Great fun, but it wouldn’t ever be as attractive as yours! On a more positive note, I am in love with these fabrics!!!

Love your quilts they are beautiful. This has been one of my favorites although I used Bonnie Hunters pattern (very similar to Missouri star). I wish I could post a pic of mine. It was all blues with very pale blue, white and grey for the focus fabric.