Can go to the left or to the right -
Or not at all - like mine - LOL - ;))
I showed you these two yesterday -
And said they were both wrong -
Then I got some comments about them swirling one way or the other -
So - I decided to do a little comparison post - 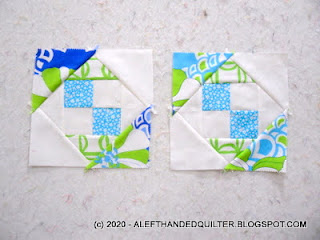 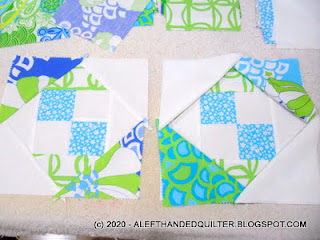 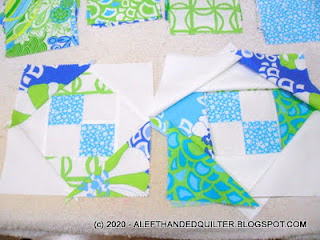 So - yeah - they can swirl to the LEFT or to the RIGHT -
Depending on which way you want them to go -
But either way -
The PRINT in the 4-patches should touch a WHITE HST corner -
But in my blocks they don't - they touch another PRINT HST corner -
And don't seem to swirl at all -
They start to go one way -
And then seem to fall back on themselves -
So maybe I made up a new block -
And they will look just fine -
As long as they all look alike - LOL - ;))
Talk to you later - gotta go - gotta sew -
Posted by A Left-Handed Quilter at 12:30 AM

Interesting, I didn't notice that they don't swirl yesterday. Maybe I will draft your "left" block and see how a quilt of them looks in EQ.

You two carry on. All this spinning and swirling has made me dizzy!