But not much - ;))
After I did my Monday "chores" -
I stitched a couple of sections -
I had two rows of small squares -
The patches in the bottom row are more rectangular -
But it's improv - so they are "close" to being square - LOL - 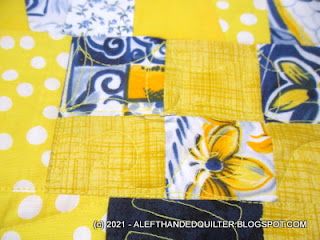 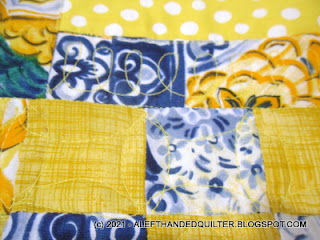 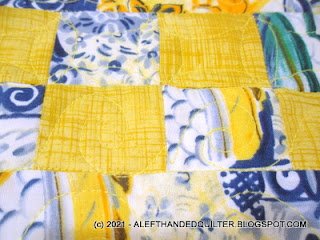 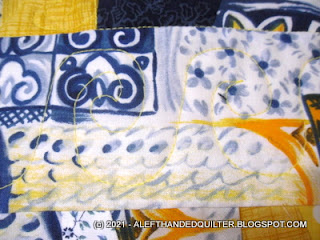 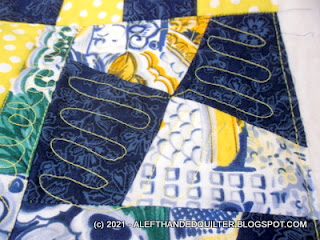 When I ran out of bobbin thread in the yellow area of the bottom light patch -
I stopped to load another bobbin -
And fix dinner -
And play some games on my tablet - LOL -
Tomorrow is another day -
And after my "chores" -
I can play with my FMQ some more - ;))
Talk to you later - gotta go - gotta sew -
Posted by A Left-Handed Quilter at 12:30 AM

I’m in awe of this kind of FMQ! I almost get a bit dizzy picturing all the twisting and turning it must take to achieve this kind of quilting. Enlarging your photos show what looks like a stellar job to me. I know seam allowances bother you, but when I’m up against them, I just plow through! I guess I wouldn’t do that if it was FMQ, but I will never try FMQ myself. Keep going!

I always laugh when I remember a quilt I sold years ago with my very early FMQ. It was worse than this and the husband sneaked back and bought it because the wife really liked it.
Non-quilters don't see things the way we do. That is the lesson I have learned.
As for the seams, if your FMQ foot is adjustable - raise it a little and those seams will be easier to sew over. (test on a sample piece.)

Only the quilt show police would give you a ticket. Having something quilted is a feat unto itself. Looks super, keep going and have fun.

Wobbles are design elements and only the quilt police would see anything different.