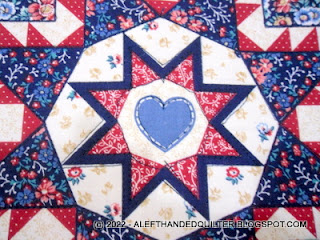 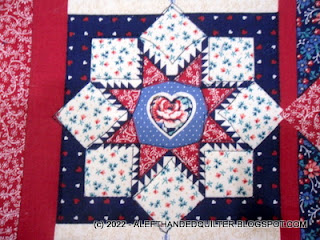 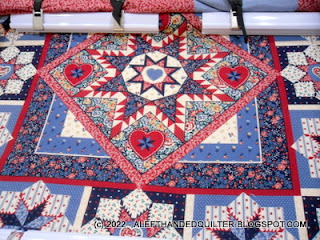 Tomorrow I'll do that part -
Then take it off the frame -
To check the tension -
And re-press it - since it has "fusible" batting -
Then decide where I want to quilt next -
"They" say to quilt it in "zones" -
Starting in the top left corner - then to the right -
Down one section - then the left side - then the right -
And to continue on that way until you get to the end -
But I think - with the "fusible" batting -
That I should be able to "skip around" -
We'll see if that works out as planned - LOL - ;))
Talk to you later - gotta go - gotta sew -
Posted by A Left-Handed Quilter at 12:30 AM

Ha ha.. I think they don't expect you to have basted at all, except the line across the top end just after you load it.

Ruler work may become your go-to quilting method. On the domestic machine, I found it to slow and tedious for my liking.

There are no rules, only guidelines. Good on you for doing it your way.

And now you see diagonals are hard! You'll get better as you learn what is easier and what needs guides. Or you can be like me and just put swirls in everything and ignore your friends rolling their eyes. (Which is kind of a swirly motion...) This looks great for your first non-junk piece!