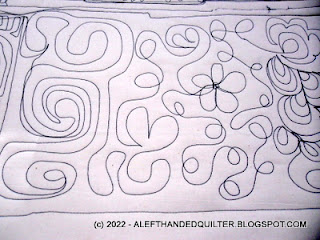 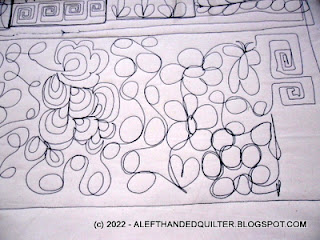 Free-form is DEFINITELY easier -
Than trying to "draw on the line" -
And no one can tell if/when I "missed the mark" -
Because there are no marks to miss - LOL -
And that last little bit on the lower right -
That's where the ruler base hit the bungee clamps -
So -
NOTE TO SELF -
Watch that right side when using the ruler base and bungee clamps -
Tomorrow I'll have to do another "re-hooping" for the next row -
And then we'll see -
If there will be enough room -
For one more row after that - ;))
Talk to you later - gotta go - gotta sew -
Posted by A Left-Handed Quilter at 12:30 AM

Definitely better! Is there some way that you can arrange the bungee clamps so that the base doesn't hit it?
I find that my quilting always improves with practice.

Looking good! You'll get more familiar with the space you have as you play and eventually that machine hitting edges thing will lessen. But you'll be ready for a real quilt in no time!

Doing great! You are getting a good feel for what is possible to do.