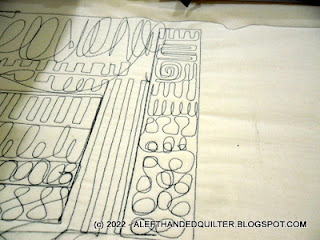 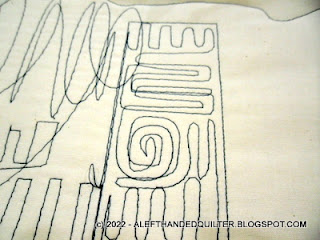 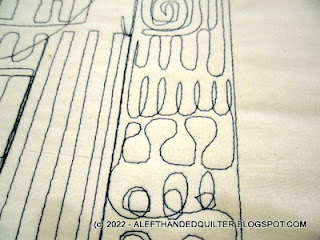 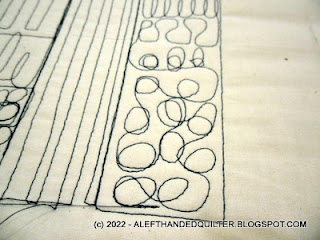 Then I tried more stuff - 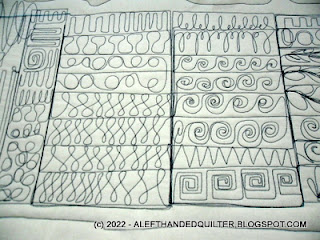 I even tried some feathers -
And they are AWFUL!! - 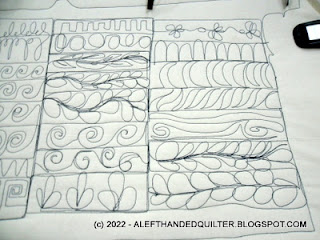 I took close-ups of the last four sections on the right side -
But I'll save them for comparison shots later -
To see if - and by how much -
I improve by the time I finish this "test" piece -
I've finished the top row -
So tomorrow I'll have to "re-hoop" it -
And - I may either try more of the same -
Or replace the bobbin and play with the tension -
Or try to install the ruler foot - and base -
And play with that -
There is SO much to learn -
That it's hard to go slow -
And take it one step at a time -
But it's like eating an elephant -
One bite at a time - ;))
Talk to you later - gotta go - gotta sew -
Posted by A Left-Handed Quilter at 12:30 AM

The Quilt Police are tut tutting over the state of The Den of Inequity, so you are safe to go as fast or as slow as you like! Ppppfffttttt!!!!! @ terrible feathers. Like anything, it comes with practise!

I have noticed on my machine that mixing poly and cotton threads can cause the tension to be a bit off.

For your first time on that machine, it doesn't look as bad as you think. (okay, maybe the feathers.....but those are harder for some reason anyway.) I have found that some days I can quilt feathers and other days they are just crap.

I mix my top and bottom threads all the time on all of my machines and don't have any problem. Jamie Wallen has some good videos about tension: you can search for them. My machine moves easily too, too easily to control perfect anything. Try meandering with flowers, hearts, or leaves added in here and there.

Looking good for your first week. And things will get better with practice. Also, when your quilting a quilt, the contrast between thread and fabric is usually not so stark, which hides a lot of bloopers. Just keep practicing and you'll be a pro in no time!